Congratulations on your awesome debut album! It must have taken a lot of time and dedication to produce. How did the recording sessions go? 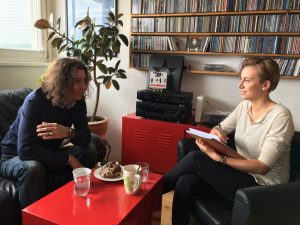 Gejza: Thanks! We worked intensively on this album for over 3 years and it brings together the most compelling songs we have written to date. This CD is the result of our idea to implement the unique sound of electric strings in rock music. It was hard work – especially during the recording sessions!

Peter: Absolutely! The recording process required complete concentration from all of us, especially when you consider that no one has ever tried something like Brazenlinx before. It was the idea of performing rock music with string instruments which made me curios in the first place and ultimately lead me to the band. It is as if this special string sound was meant for rock! In 2014, when we had our first rehearsal, I warmed up pretty quickly, and so we could get started right away. The result is this album. It’s a collection of all our ideas and the essence of our musical passion. It’s authentic and honest.

How would you describe the sound of Brazenlinx?

Gejza: In short, I would say that we are definitely hard rock. We have an extraordinary sound, because we have done away with the typical instruments of this genre, namely the electric guitar and the electric bass. Instead, we created a new and original sound by using viola and cello and as a result we’ve been able to vastly improve and increase our sound spectrum. I must stress that this is not an attempt at imitating a guitar. Our electric strings achieve tones that can differ greatly from the traditional guitar sound and offer many more possibilities.

Peter: Generally, I am not a fan of the typical “Classic Meets Rock” idea, because that can quickly move towards mainstream. In this respect, Brazenlinx doesn’t compromise. We’re not pretending to be something we’re not. Our music is straight, honest, unapologetic and stripped down to the bare essentials – 100% rock. I am very proud of our work, we have basically created a subgenre in the rock world.

How did you come up with the title of your album?

Gejza: Vienna is without a doubt the capital of the classical music world, but with regard to rock music it has yet to enter the real competition. Classical instruments have no frets, but rock instruments normally do. The title of the album is a play on words about the unique choice of instruments as well as our relationship to our hometown… actually when you think about it, where else could a band like Brazenlinx have emerged from?

Peter: Right! …and to all those in the conservative music metropolis of Vienna (in which rock music has almost no place) we say: “Vienna Don’t Fret!” We’ll make Austria loud again! (laughs)

Final Question: What is your favorite song on this album?

Peter: For me, “Go Getters” has the all the necessary ingredients to be a hit: The drive, the solo, the lyrics. Everything fits together perfectly on that track. “Death row” moves me because of it’s profound substance. It’s also one of my favorites because of the severity, gravity and weight of the message.

Gejza: Definitely! “Death Row” is not only my favorite, but is also in my opinion a perfect song as it is both harmonically and thematically extremely united. The message is powerful: our very existence is fleeting, and so, we should concentrate on the now. This is the only way we will be truly free… Go for it!

Peter: Just let me mention one more number: our cover version of “More” by Sisters Of Mercy is a completely new interpretation of this song. We really spent a long time experimenting until we were satisfied. You can really hear the results – just like the rest of the album! (laughs)

This site uses Akismet to reduce spam. Learn how your comment data is processed.